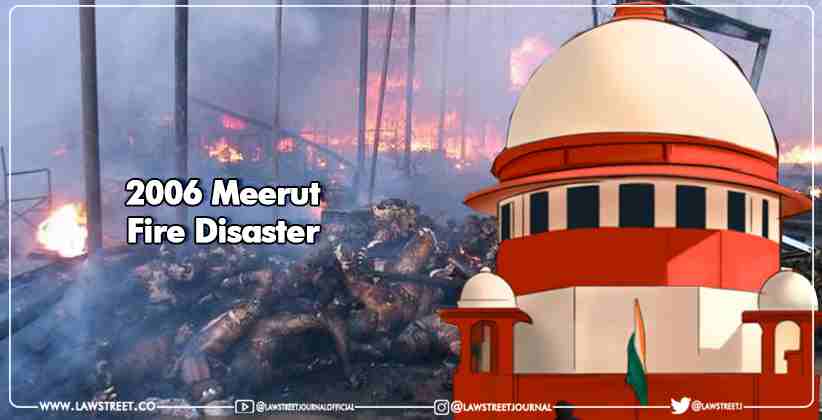 A Supreme Court bench consisting of Justices Hement Gupta and Ramasubramanian has reserved judgement in a petition brought by relatives of victims of the 2006 Meerut fire disaster. After 16 years, the case has been reserved for judgement.

Shanti Bhushan, a senior advocate and former Law Minister, continued his remarks today, claiming that there was no specific evidence to determine how the fire originated and that the event planners could not be held liable in these circumstances.

Bhushan, who was representing Mrinal Event Managing Corporation, contended that the company should not be held liable.

Referring to the order passed by the Supreme Court directing the event organisers to deposit a sum of Rs.30 lakhs, he said,  “How much will they have to suffer? They have already suffered enough.”

Justice Hemant Gupta at this point interjected Bhushan and questioned,
“What about the suffering of those who perished in the fire?”

Bhushan elected not to respond to this question. It was also argued that just the event managers were imprisoned, and that no one else was held guilty or imprisoned as a result of the incident.

Bhushan contended that the Justice SB Sinha committee's findings are not binding on the court because it was a State-appointed commission rather than a judicial one. He also claimed that the Supreme Court, in an order dated July 31, 2014, simply substituted Justice Sinha's name for Justice Garg, who was appointed by the State.

The Meerut fire catastrophe occurred on April 10, 2006, on the final day of Mrinal Events & Expositions' India Brand Consumer Show in Victoria Park. According to accounts, a short circuit at the venue produced a fire that killed 60 individuals. According to media accounts, the fire spread through a consumer show in Victoria Park, and almost 2000 people were present at the time of the fire. There was also a stampede-like situation as a result of the occurrence. According to media accounts, despite being arrested by the local police, the event organisers fled and never appeared in court.

Sanjay Gupta, who had lost five members of his family in the incident, filed the current case in 2006. The plea was entered on the grounds that the State's investigation into the tragedy was improperly conducted. Justice (retired) OP Garg of the Allahabad High Court was appointed by the then-Uttar Pradesh government as a one-man committee. The report's findings, however, were challenged by the organisers, who claimed that they were not heard.

By order dated July 31, 2014, the Supreme Court designated Justice (retired) SB Sinha as the one-man commission to investigate the subject. The state was ordered to pay Rs.5 lakhs to the legal representatives of the deceased, Rs.2 lakhs to those who were gravely injured, and Rs.75,000/- to those who had lesser injuries by the same judgement.

On hearing the parties, the court adjourned the matter for decision after 16 years and allowed the parties to offer brief written statements.

Bhushan had yesterday argued that the victims have already been paid enough compensation and said “How much more do they want?”