'Ensure that buildings of Rajasthan Bar Council Shall be made Operational as Covid Care Centre at the Earliest For Advocates, Family Members': Rajasthan HC to the State Government 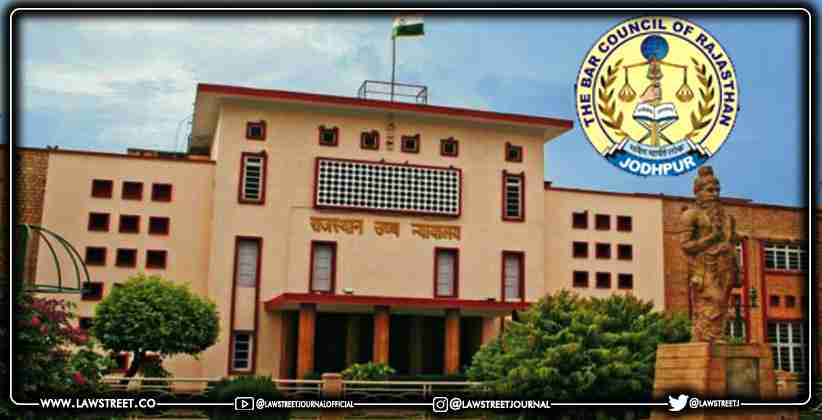 The Rajasthan High Court, Bench at Jaipur, in the previous week directed the State Government to ensure that the Rajasthan Bar Council buildings at both the benches shall be made operational at the earliest as covid care center so that the advocates and their family members having initial symptoms may be treated or isolated. An order to this effect was passed by a division bench chaired by Chief Justice Indrajit Mehanty and Justice Satish Kumar Sharma.

“The state government shall ensure that the building of the Bar Council of Rajasthan, both at Jaipur and Jodhpur shall be made operational as covid care center at the earliest. Necessary medical staff shall be deputed at both the places and essential medical facility, such as oxygen concentrators, oxygen cylinders and medical kits shall be made available so that the advocates and their family members having initial symptoms of the disease may be treated and or isolated,” it read.

This development took place because of the plea filed by the Rajasthan High Court Bar Association highlighting the plight of covid patients and the situation arising out of shortage in hospitals into a PIL. In the previous month the court had formed state level and district level committees to elevate the difficulties faced by the general public at large in the state of Rajasthan.

The court said that, “the concerned authorities shall cooperate the committees by taking immediate steps to resolve the grievances so reported by these committees, however in case any grievance is not redressed, the concerned committee shall communicate the same to the covid redressal cell, constituted in the office of the registrar general of this court and in turn, the cell so constituted shall bring the unattended grievances to the notice of a nodal officer to be appointed by the secretary, medical and health state of Rajasthan who shall ensure redressal of the same at the earliest possible.”

During the hearing, Abhishek Manu Singhvi and Advocate General MS Singhvi, for the State of Rajasthan apprised the court that Central Government had allocated medical oxygen, however, due to paucity of cryogenic tankers, it was not possible to get the required amount of oxygen for the increasing number of covered positive patients.

Further submissions were made that the Central Government should be directed to ensure logistics for transportation of oxygen, allocation and timely supply of oxygen, and essential medicines in proportion to the active cases in the state.

The court acknowledged and appreciated the efforts put in by the Central Government, State Government, NGOs and individuals for containment of the coordinating pandemic and to join hands to minimize the pain of sufferers of the pandemic.

“We record our satisfaction that as a result of total lock-down and other preventive measures, the number of active patients is decreasing, but no laxity can be afforded till total control over the pandemic is achieved. In our opinion no purpose would be served by fault finding or blaming each other, rather it may discourage the Corona warriors who are dedicated and committed to serve the sufferers even by putting their lives in danger. Once we overcome the pandemic, everyone would get ample opportunity to introspect to take necessary steps or to formulate a concrete plan to effectively deal with probable 3rd wave of the pandemic,” the court said.

Moreover, a national task force has been constituted by the Apex Court to ensure proper allocation of essential medicines and oxygen by the central to the state government, it was brought to the knowledge of court that a proper mechanism has been in place for this purpose.

The court also observed that the requirement of oxygen and essential medicines depends upon the number of active patients which varies day by day, the court directed the state of Rajasthan to place the requirement of oxygen and necessary logistics for its transportation and essential before the central government with the necessary projected details.

The court directed that the requirements of the state shall be immediately considered by the central government and allocation of oxygen an essential medicine shall be strictly made in proportion to the active patients of COVID-19 at the earliest possible, and adjustments may be made in the next instalment, if any surplus is available from the earlier allocations.

Moreover, the court went ahead to direct the Centre to consider to arrange required number of cryogenic tankers for transportation of medical oxygen as well as allocation of the oxygen from within the state from nearby places to avoid dealing transportation.

“We are confident that looking to the urgency an important the central government task force shall ensure timely support of oxygen and machines as per allocation so that not even a single person suffers on that count, ” the court noted.

While posting the matter for further hearing on May 26th 2021, the court directed the Union of India to file reply in the matter.

The title of the case is Rajasthan High Court Bar Association Vs State of Rajasthan.

Judiciary Aug 19, 2021 Saakshi S. Rawat ( Editor: Ekta Joshi ) 5 Shares
5 Shares
The Rajasthan High Court recently rejected special protection to a married woman who is living with some other partner and seeking protection from certain private individuals who are unhappy with her engagement.Justice Satish Kumar Sharma's panel cited a previous Allahabad High Court ruling in which the Court rejected a married woman residing with her partner's safeguard petition at an exorbitant cost of Rs.5,000, indicating:"No law-abiding individual who is already registered under the Hindu...
Read full post

Judiciary Jul 16, 2021 Nancy Goyal ( Editor: Ekta Joshi ) 6 Shares
6 Shares
The Rajasthan High Court has directed the Child Rights Department of the State Government to conduct training of Principal Magistrates in Juvenile Justice Boards for sensitizing them with the Juvenile Justice Act, 2015.The Division Bench comprising Justice Manoj Kumar Garg and Justice Sandeep Mehta passed these directions on July 13,2021, during the hearing of a Suo Motu case based on a news report published in ‘Dainik Bhaskar’ relating to the miserable condition being faced by the oral and...
Read full post