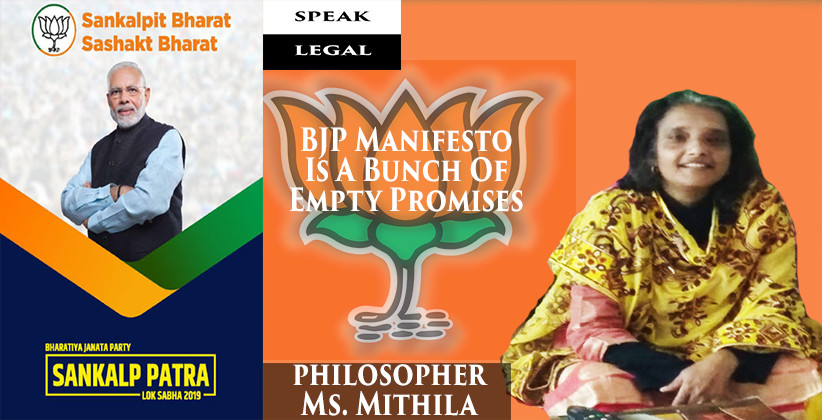 Speak Legal Apr 10, 2019 Lawstreet News Network 0 Shares
0 Shares
Ahead of the 2019 general elections scheduled to be held in seven phases from April 11, 2019, to May 19, 2019, the general masses are either touting or criticizing the political parties over there promises.

The Bharatiya Janata Party (BJP) is one such political party which has been battling over a lot of criticism. Talking to LawStreet Journal, eminent philosopher Ms. Mithila blamed the BJP for making promises which they had no intention to fulfil, making people lose their trust in the political party.

She said that “BJP security doctrine is a sham in the face of the fact that they showed the defence bases to the ISI after Pathankot attack and after the country has seen an unprecedented rise in terror attacks and death of Indian soldiers in last 5 years. With an absolute majority, it didn't resolve the Kashmir problem. It shows that the promise of Kashmir is just a false dream to win the election.” Further talking about the failing exports of indigenous products in the global market, Ms. Mithila said that “No country can become an economic power house unless its own indigenous products dominate the global market. This government has done nothing to help the failing exports and strengthen the outflow of Indian indigenous products in the global market. Rather, the indigenous industry sectors are being killed by allowing the foreign multinationals to trample them and by allowing more than 49% foreign ownership in Indian companies. This government has helped only foreign multinationals in India. Thousands of years old handicrafts industry is being killed by insensitive policies of this government.” “If the party wanted to improve the economy it would have scrapped the GST and instituted a single 10% income tax on all who earn more than 250,000 per year,” Ms. Mithila added. Moreover, rapping the political party for not clarifying as to how it aims to reduce poverty, Ms. Mithila said that “Farmers' dependency on commercial seeds and infrastructure has to be ended if they have to be helped. Merely giving them loans without interest is not going to solve the problem. This raises the suspicion that these are just empty promises.” BJP has released its Manifesto on April 8, 2019, for the upcoming Lok Sabha elections. The manifesto contained a slew of promises like abrogation of Article 370, annulling Article 35A, passing Citizenship Amendment Bill, forming Triple Talaq law, drafting Uniform Civil Code and providing reservation to women in parliament and state assemblies. The party also promised to facilitate the expeditious construction of the Ram Temple in Ayodhya. Read the BJP Manifesto below.

‘It is the Right of Worshippers to Make Endeavor to Bring Back Lost Property of the Deity’: Appeal Filed Against Mathura Court Order In ‘ShrikrishnaJanam Bhoomi’ Case

Judiciary Oct 14, 2020 Richa Shah ( Editor: Ekta Joshi ) 1 Shares
1 Share
A civil appeal has been filed before the Court of District Judge, Mathura, against a civil court order that dismissed the suit for removing the Masjid Idgah which was allegedly built on the land of ShrikrishnaJanam Bhoomi.The appellant said that the civil judge was wrong in dismissing the suit as they were worshippers of Lord Shri Krishna and had the right to assert their right to religion which is guaranteed under Article 25 of the Constitution. It also guarantees a right to perform puja at...
Read full post 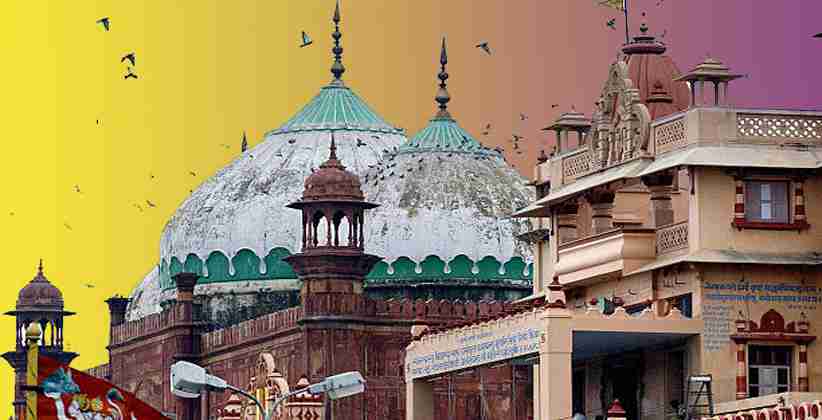