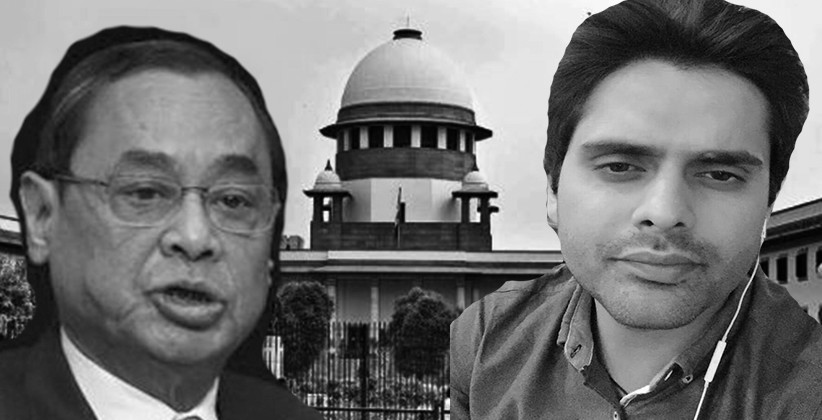 The Supreme Court today (April 24, 2019) asked advocate Utsav Bains to file an additional affidavit to substantiate his allegation that three disgruntled employees of the apex court came together to frame sexual harassment allegations against the Chief Justice of India Ranjan Gogoi.

The Bench comprising of Justices Arun Mishra, R.F. Nariman and Deepak Gupta giving time to Bains, has listed the matter for further hearing on April 25, 2019, at 10:30 am.

In an earlier hearing held today, the Bench summoned CBI Director, Delhi Police Commissioner and the Chief of Intelligence Bureau at 12.30 PM for an in-chamber meeting to decide on the investigation into the alleged conspiracy against CJI.

The meeting was called after the Bench took very serious note of the contents of the affidavit filed by Bains, who was present at the hearing. Bains handed over materials to the court in a sealed cover. He said that the materials contained a CCTV footage which will reveal "many things".

After that, the Bench reassembled at 3 pm to have further interactions with Bains.

In the session, Attorney General K.K. Venugopal said that, "We are only concerned about how a person can file an affidavit of this nature but doesn't produce evidence. I really cannot understand how a person can make certain allegations and claim rest is privileged.”

The statement made Bains furious, who complained that the AG is making personal allegations.

This was not appreciated well by Justice Nariman, who said, "You have no right to doubt him. He's the most respectable member of the bar. We all look up to him. If you say doubt, we will throw you out.”

At this, Bains said that he was "walking out of the court on his own".

This led, Justice Mishra to intervene, who said to Bains that "You are a young man. Don't take things to your heart. He (J Nariman) didn't mean he'll throw you out. He was communicating his anger.”

Continuing the session, Justice Mishra said that “We want to know veracity of the affidavit. If he is saying that there are fixers, we want to go to the root of the matter. That is a serious issue before us. We are going to inquire and inquire into it. The Supreme Court will not survive otherwise. Not just us.”

Further, Justice Mishra also said that, It is not just about CJI; Trying to fix Benches. Disgruntled employees coming together, three employees were dismissed; such an action has never been taken before by any CJI.

After the hearing, Justice Mishra dictated the order, asking Bains to file another affidavit regarding his allegations against sacked employees. The court also said that it will decide the issue if privilege can be claimed over the communications between Bains and the alleged conspirators.

Senior Advocate Indira Jaising, who was present at the hearing pointed out concerns over possible conflicts between parallel proceedings - the present one and also the in-house inquiry by the panel headed by Justice Bobde.

Answering this, the Bench clarified that the exercise of judicial powers by this Bench will not affect the pending inquiry by the in-house panel.